One of the main purposes of the project Polish Traditional Music – Phonographic Heritage. Present state, preservation, sharing is to create, develop and keep the central digital repository (etnofon.ispan.pl) of digitised and substantively developed documentary phonographic and film recordings which preserve Polish traditional music and songs as well as folk dances.

The repository – the key result of the project Polish Traditional Music  – Phonographic Heritage is a space which holds and preserves digital mapping of the content primarily preserved on the historical sound and picture carriers as well as the currently created born digital objects. Digital objects obtained by the process of digitisation (master copies) are being archived, while so-called utility copies are being demonstrated and shared with the users: mainly the scientists (ethnomusicologists and researchers of other disciplines, especially humanities) and others who are interested in the created application, dedicated to the ethno-phonographic and ethno-cinematic sources aggregated in the repository. 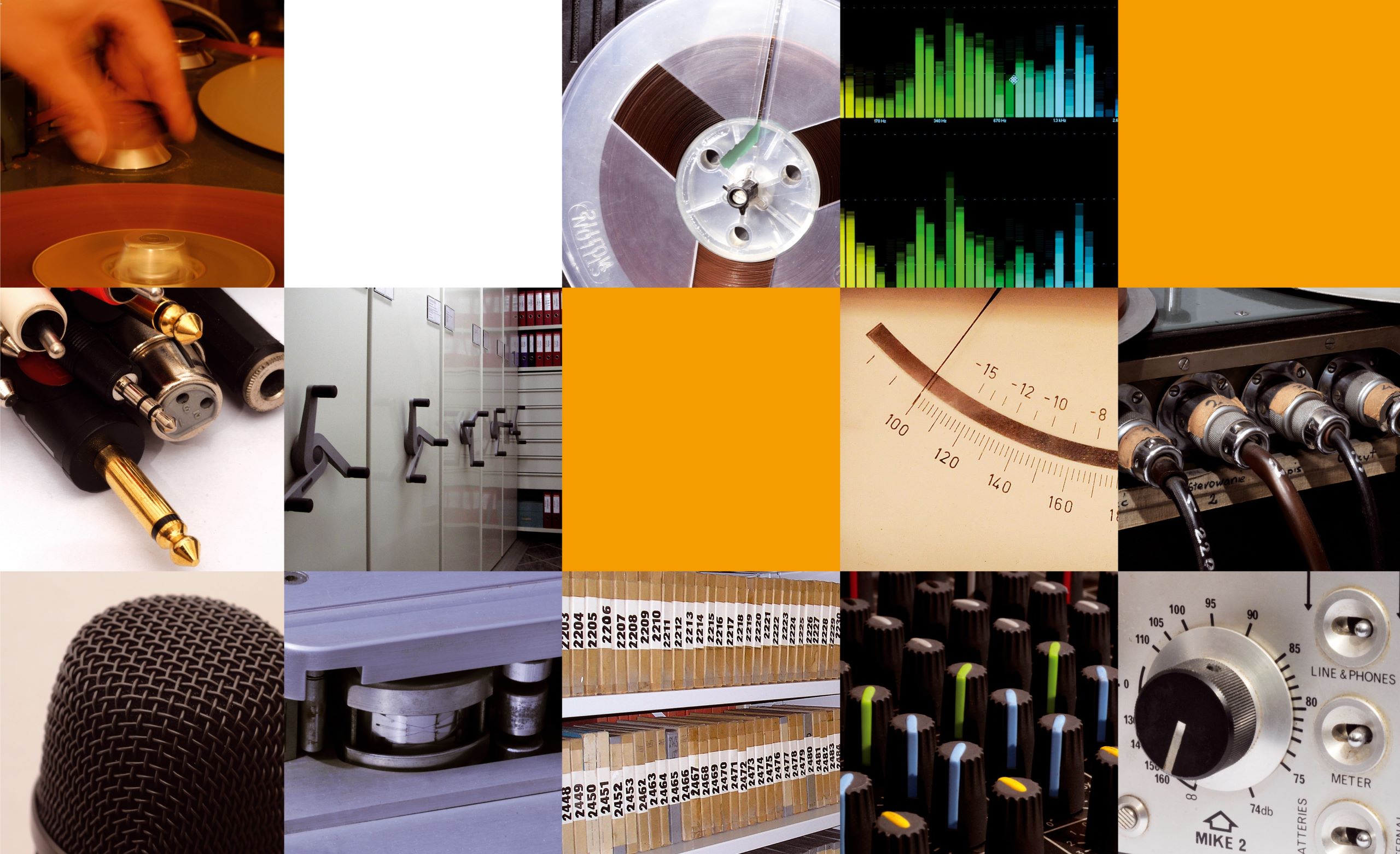 Original archives are subject to research and preservation process, while the digitisation process is preceded by the analysis and development of the optimal model, both for the reading of the source as well as creating, preserving and administration of its digital mapping. After the digitisation process which includes, according to the holistic concept of the project’s author, the additional digitisation of all non-audio objects connected with the source and all the metadata, the archives are secured and stored in appropriate conditions so that they can serve further as a master proof for written down analogue information.
Digitisation of cultural heritage objects is commonly understood as a process of creating digital copies (mapping, duplicates) of such objects. The main purpose of digitisation however, is mainly the distribution (sharing) of the copies as well as their long-term (timeless) preservation which becomes a form of securing (or rather saving) the cultural property for the future generations. However, it must be underlined that not only copies, but also the original objects in their analogue form are secured. So, the term „digitisation” must be then understood as a situation in which digital copies of high quality computer files are being produced, and later preserved in the so-called mass memory. The process of digitisation should not be identified with nor mistaken for the process of sound reconstruction, nor for the archiving or the phonogram maintenance. Creating digital copies on individual specimen by copying phonograms from analogue carriers onto CD-R plates should not be identified with digitisation, similarly copying recordings into forms of reduced quality files (such as a popular MP3 format) should not be treated this way. Moving data (sound recordings) as well as so-called metadata – that is crucial information about digitised objects (also recorded on analogue carriers or as traditional documentation in a form of minutes, pieces’ lists, filing cards, inscriptions, etc.) into the form of a digital recording (file, computer catalogue, database) is currently the most popular way of duplicating archival collections, which can be proven by the practice of numerous archives worldwide. The process of digitisation allows also to publicise digital copies of collections and documents as well as create an easy and fast access to information, without excessive exploitation of the originals.

In 2004 The Institute of Art of Polish Academy of Sciences, as a pioneering humanistic research and development institution, initiated systematic digitisation of its own as well as the oldest and the largest collection of documentary sound recordings of Polish traditional music. At the same time, with the use of modern methods, the archival resources for research have also been made available. Important factors that influenced the decision to start the digitisation of ethno-phonographic heritage were, on the one hand, care for archival recordings, and on the other: the possibility of using unique, more and more difficult to access and more and more expensive, both in the market as well as in the service price, appropriate equipment for reproducing historical recordings. With the use of a well-developed method, within individual stages of a strategic and multi-level project entitled Polish Traditional Music – Phonographic Heritage. Present state, preservation, sharing there have been made all kinds of processes such as digitisation, substantive elaboration and archiving of some of the Phonographic Collection of the Institute of Art of Polish Academy of Sciences. The works included also identification, digitisation and elaboration of recordings belonging to several scientific, museum and cultural institutions among others. Digitised recordings along with metadata are available in a specially designed and built system meant for ethnomusic Phonographic Collection – a central digital repository of documentary phonographic and film recordings which preserve Polish traditional music and songs as well as folk dances (etnofon.ispan.pl). 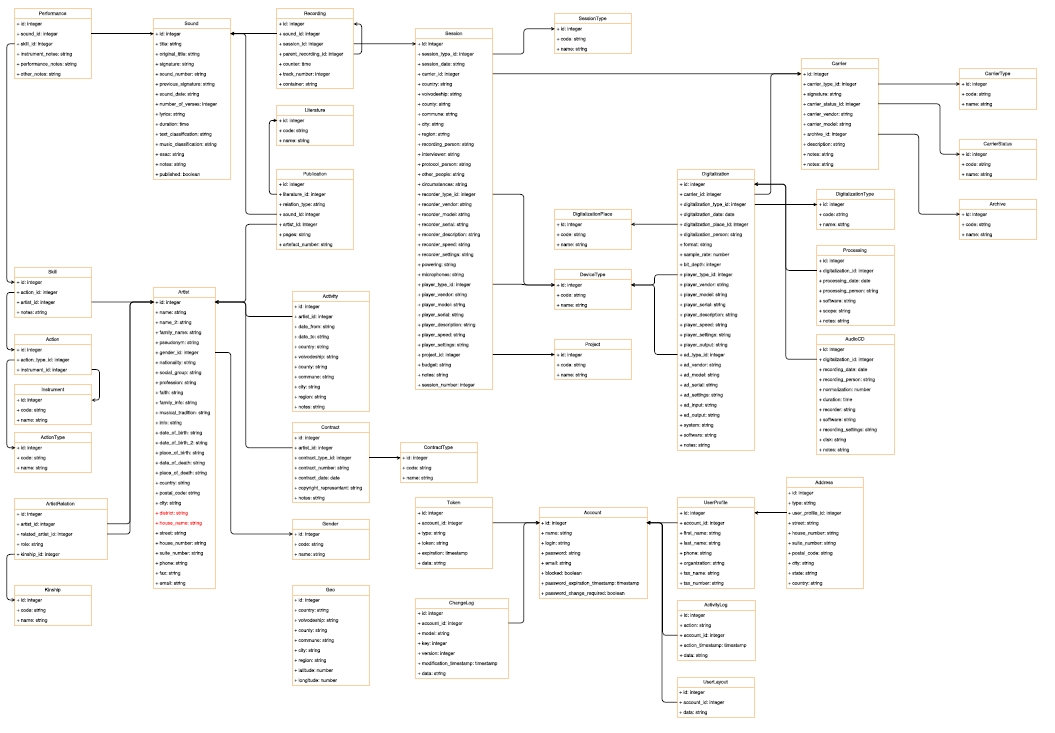 The creation, development and maintenance of a central digital repository of digitised and developed documentary phonographic and film recordings is one of the main objectives of the project Polish Traditional Music – Phonographic Heritage, having been implemented in the Phonographic Collections since 2014.

The repository is a space where digital representations of the content originally recorded on historical sound and image carriers are collected. Its resource is systematically enlarged also by born digital objects. The digital objects created in the digitisation process are secured as model copies, while the so-called utility copies are demonstrated and made available to researchers as well as interested parties through applications designed as part of the project, dedicated to the nationwide ethno-phonographic and ethno-cinematic resource, aggregated in the repository. The repository, along with the applications and database, forms a system for:

►scientific processing of objects and metadata created and related to each other according to the holistic concept of digitisation and archiving. Such approach, created and implemented by the author of the project, involves the digitisation and connection of all objects, data and processes related to the recording (audio source) and its reproduction, e.g. all written documentation, graphic representations of objects, etc.; not only the content of the recording, but also the medium itself, along with the accompanying documentation, usually in the form of manuscripts, are here equivalent archival objects containing a lot of information (metadata) regarding the context of the recordings;
►sharing resources with researchers;
►management and administration of facilities and data.

Currently, the repository holds about 100,000 digitised archival recordings of songs and melodies. Considering that the stock of analogue recordings of the Phonographic Collection alone is estimated at approximately 150,000 recordings, it can be concluded that the project is in the development phase.

Access to the resource of objects and content takes place through two applications dedicated to these collections. In 2017, after the stage of research and analysis of objects, data and processes, a system for development and exploration of ethno-phonographic resources was designed.

In the initial stage of the project and during work on the system architecture, the experience of the Phonographic Collection team was used, based on their work on various applications. In autumn 2018, initially only as a test environment for the employees of the Phonographic Collection of the Institute of Art of Polish Academy of Sciences, the system was implemented and put into use.

The system and the talked-about project were presented, discussed and assessed during numerous ethnomusicological conferences and in the environment of music librarians responsible for music libraries, as well as specialists in the field of engineering and sound engineering.

The system was built to support the broadly understood area of processing information about digitised recordings of cultural musical output in the field of Polish folk singing and music. This processing involves two areas: the editor and the user; therefore it concerns both information and administration, thus enabling the possibility of entering and modifying data, as well as its exploration and sharing in a controlled manner while ensuring confidentiality of specific data stored in the system. The repository stores objects (not only sound objects) along with all metadata describing them. The scope of information stored in the system is therefore very wide and the problem of description of an ethno-phonographic document is an important assumption and purpose of activities carried out within the framework of the project. The scope of description includes, among others:

A complex set of relations between the objects of individual registers has been defined, thus enabling the presentation of complex dependencies between them, all in order to reproduce the actual dependencies as faithfully as possible and to be able to quickly and precisely search for the necessary information. 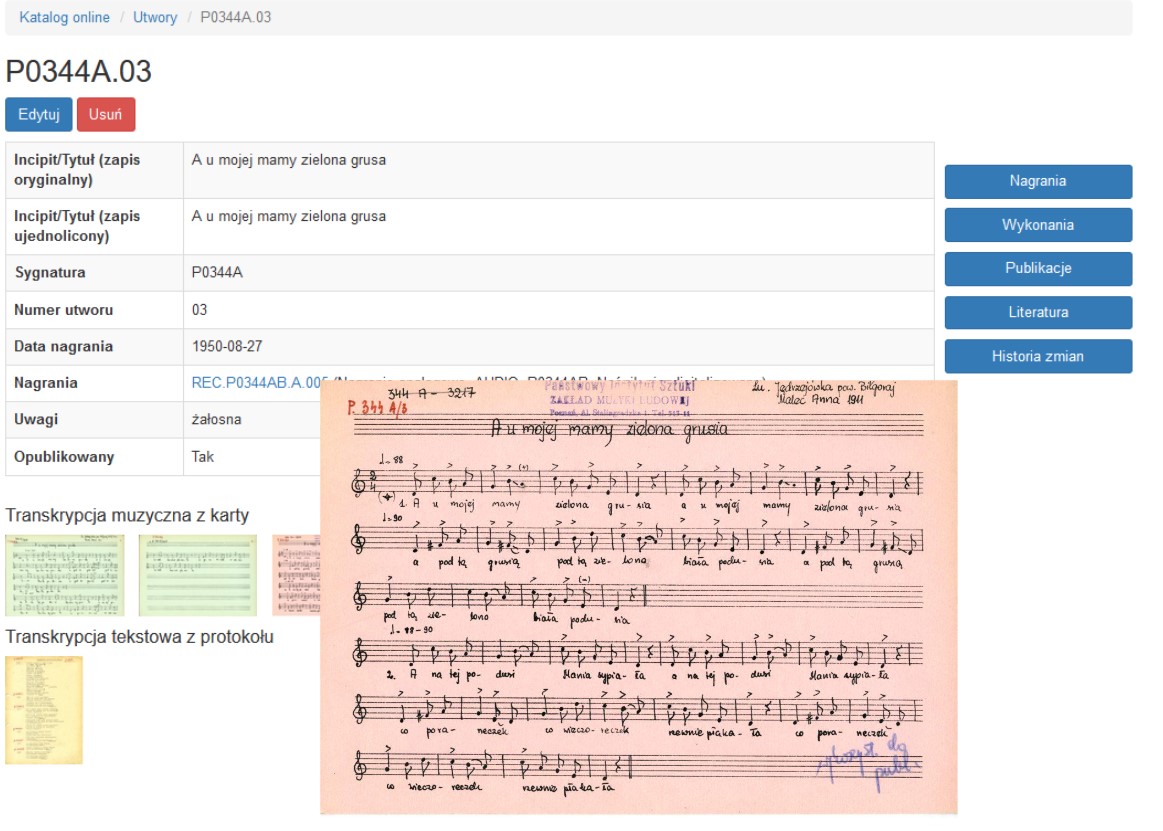 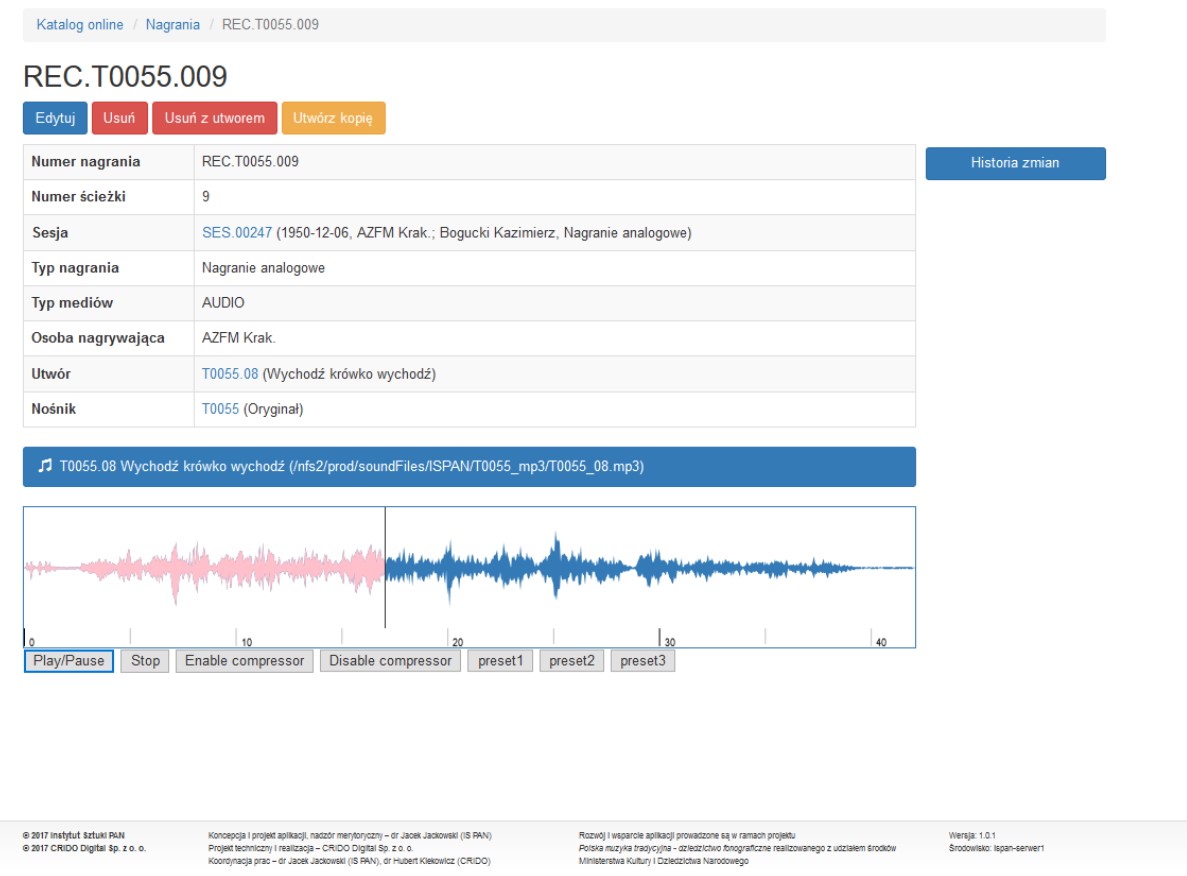 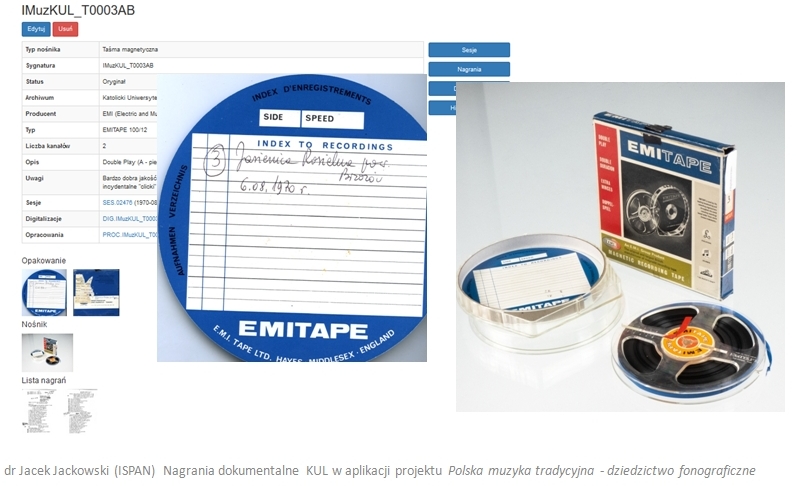 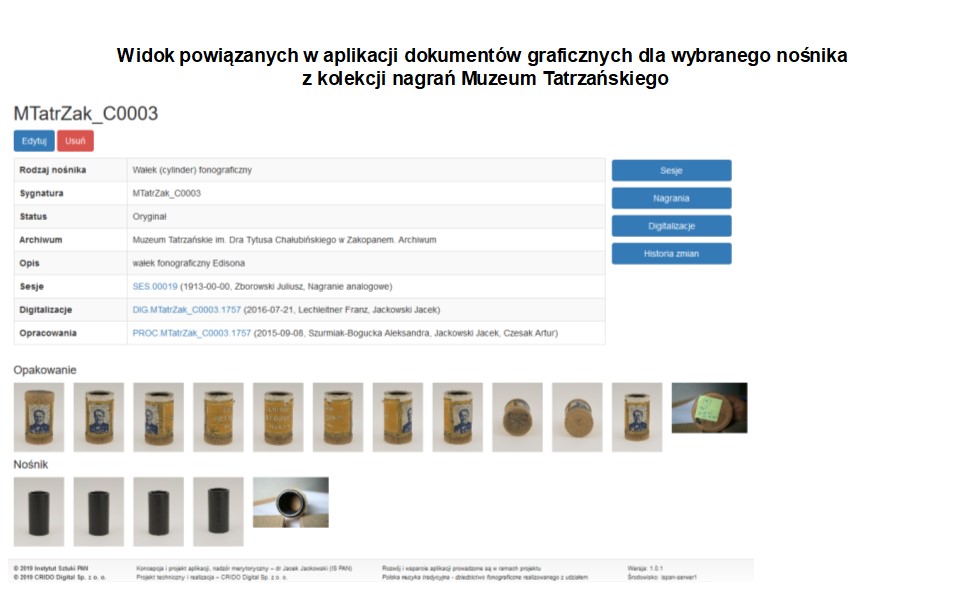 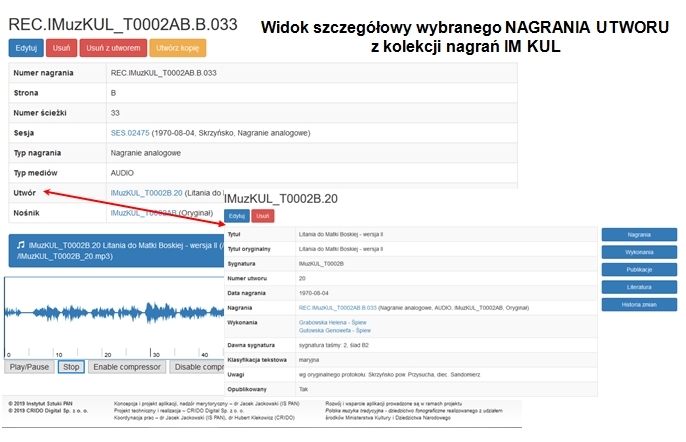 Each register is a set of homogeneous objects described by a set of single attributes. Currently, over 100 descriptive categories – attributes have been developed. Some of these attributes are listed in alphabetical order. Works on dictionaries and lists of unambiguously formulated data continue, as do works on data editing and valorisation. The system is integrated with the repository of audio-visual files and enables the presentation of these resources by playing them directly to the user in the system. A unique functionality, designed on the basis of user search analyses, is the report mechanism, which allows generating rich sets of information based on very complex search criteria that can be configured by users unfamiliar with technical database queries. The use of these search criteria is possible through a dedicated interface that allows you to build virtually any nested search conditions based on filters built on any of the attributes. The effectiveness of searches depends primarily on the quality of the data stored in the system, which is why the overriding goal of the continuation of the Polish Traditional Music – Phonographic Heritage project is – apart from enriching the repository with new objects and data – to work on the editing and valorisation of a huge amount of already existing data regarding the oldest recordings of Polish traditional music.